When Jim McGrail started a winery after retiring as a cop, he wasn't planning to win a major award and get famous. He just wanted his daughter to come home.

Heather McGrail had moved from the family home in Livermore to Scottsdale, Arizona because she hated her job selling wine to grocery stores for Gallo.

"I said I'd never work in the wine industry again," Heather said, standing outside the 5-year-old McGrail Vineyards winery.

"It's not just the McGrails winning, it's about Livermore Valley," Jim McGrail said. "It's good to see Livermore get some credit."

The wine that won the hardware, McGrail Vineyards Reserve Livermore Valley Cabernet Sauvignon 2008 ($36), is delicious and balanced, with plenty of cherry fruit and some toasty, spicy and savory notes. The mouthfeel is excellent, with moderate richness and some tannic pushback, yet fine acidity to make it food-friendly. I can see why the judges liked it. (Sorry folks, its fame led to it selling out, but the winery is open to the public on weekends and you can taste what they have in stock.)

A lot of what's right about this wine, and McGrail Vineyards in general, is serendipitous.


"I don't know if I've ever been in love with wine," Jim McGrail said. "I've always liked wine, but I never thought too much about it. This was an opportunity for our family to work together and be together."

Jim McGrail, who retired early from the Alameda County Sheriff's Department, bought the 25-acre parcel in Livermore Valley more because he liked the view than to become a farmer. It is a great vantage point, with Cedar Mountain to the southeast and the distinctive sliced-out look of Mt. Diablo to the Northwest.

And it's also great terroir, with very gentle slopes and breezes from the Altamont Gap providing cooling at night. Jim McGrail had the soil tested and learned the sandy loam was good for Cabernet Sauvignon, which was convenient because that's all he likes to drink.

At first he sold his grapes to Steven Kent winery, which released a McGrail Vineyards Cabernet. But Livermore had a glut of grapes in 2005, when the state had its biggest crop ever, and Kent decided not to keep buying from McGrail. So he said, what the heck, let's just make our own wine.

Winemaker Mark Clarin knew the Livermore terrain, as he had worked for Wente for more than 15 years, finishing up as winemaker for Tamas Estates, but he was on the Central Coast working as a production manager for Bonny Doon. Just when McGrail needed a winemaker, Bonny Doon laid off Clarin, who returned to Livermore looking for consulting work.

"At Bonny Doon we were making half a million cases," Clarin said. "This, working with this vineyard, is a different scale."

Clarin likes to experiment with different barrels. He has alternate versions of the award-winning Cabernet made in American oak ("The Patriot"), Hungarian oak ("A Jo Elet") and French oak ("James Vincent"). The Patriot is too intensely oaky, but the French and Hungarian oak versions are interesting to compare, with the Hungarian seeming more fruit-forward and the French seeming to have a bit more integration and complexity. The award winner, the company's flagship wine, included elements of all three, and was more than the sum of its parts. 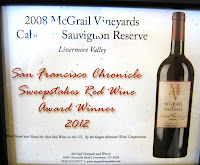 Clarin said the response to the Best Red Wine award was gratifying, but "we need to make great wine every year." He's making it, Heather is marketing and selling it, and Jim is looking on proudly. Not only did he get his daughter in the family business -- he got her in the law enforcement family as well.

When Heather fled for Scottsdale, she moved away from her boyfriend, who met her at St. Mary's College. Her boyfriend hadn't planned to become a cop, but being around the McGrail family made an impact, as Heather's brother had followed his father to the Alameda County Sheriff's Department.

"(My boyfriend) loved how much my brother loved his job," Heather McGrail said.

Now he's her husband, he's also in the ACSD, and they live just a few minutes' drive from the winery and Jim McGrail's home, which is just how Jim likes it.

"Heather's the hardest-working kid I've ever met," Jim McGrail said, before heading off to his current job as a private defense attorney, leaving the winery in her hands.